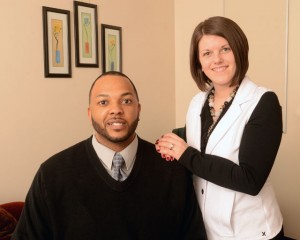 “It’s fun working with kids,” says James Williams, Manager of the INTAC (Intensive Adolescent Care) Program in the YOC’s Cottage 2. “It makes you stronger, keeps you young. It’s fun trying to keep up with them.”

James is married to Ashley Williams, the TASC (Treatment of Adolescents in Secure Care) Program Manager. Together, the
couple represents 23 years of collective experience helping troubled kids learn and grow.

Ashley knew as a child she was going to somehow serve people who were at risk in the community when she grew up. While earning her degree in criminal justice from Ball State, she did an internship with the YOC that turned into a full-time position. She has been here ever since.

She says her father, a police officer, was an inspiration to her and a major influence on her career choice.

“He was doing a really difficult job, but it was necessary,” she says. “I recognized that there’s a need there and it takes people to address that need. Regardless of how difficult that need was, he pushed through.”

James always knew he was good with kids. Removed from his biological family at the age of eight because of physical and mental abuse in the home, James was already drawing on personal experience to empathize with kids in his church struggling with family issues.

“Someone gave back to me,” James says, referring to his adoptive parents. “I knew I had to do that same thing.”

James applied to the YOC 12 years ago and never looked back. He began in the TASC unit, and learned there how to work patiently with some of the most emotionally and physically volatile residents on campus. He was promoted to the position of Cottage Manager five years later, and last summer moved to Cottage 2.

The main difference between James and Ashley’s programs is the level of risk the kids are to themselves or each other. In the secured TASC unit, the goal is to stabilize residents medically, then behaviorally, so they can move to a less restrictive environment like Cottage 2. James and Ashley train their staffs regularly to make sure kids are getting what they need on an individual basis.

“We want to make sure the kids in our program feel safe. Hopefully it enables them to focus on themselves and their treatment needs,” James says.

Ashley and James credit their faith in God as the reason they’ve been successful in their positions.

“I think that my supervisors have been able to trust me in different roles and know that I’m going to do what’s right,” Ashley says. “I can’t take any of the glory for that, because I’m a different person by having the Lord in my life. It’s because of him that I strive to be this person.”

James says that although he and Ashley aren’t as direct with their faith in Christ at work as they are in their church youth ministry, the strength their faith gives them is always evident.

“In Matthew, we’re told to be the ‘salt of the earth’ and ‘light to the world.’ When you live your life knowing that’s what your responsibility is, you just do things better.”