A Heart for Kids 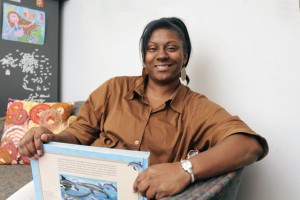 For many children at the Youth opportunity Center, the problems they face at home—poverty, neglect and abuse—are painful enough on their own. So it’s especially hard for them to deal with the perception that, because of their circumstances, they are “bad” kids.

That’s why the presence of Deelah Jackson, an Advanced Child Care Specialist at the YOC, means so much to them.

Deelah grew up on the on the unforgiving streets of Fort Wayne’s south side. Her mother, who was a divorced single parent of three children, struggled to pay the bills on her own.

“I had gangs around me, I had drugs around me,” Deelah said. “It wasn’t the best environment for a child to grow up in.”

But Deelah was driven. She worked hard at school, and she took pains to avoid trouble. “I saw my mom struggling to raise me as a single parent, and that inspired me. I didn’t want to get caught in the cycle of poverty.”

Deelah’s efforts paid off, and she was accepted into college. She earned a degree in education at Ball State University, and now she teaches 4th and 5th grade at Grissom Elementary School.

But prior to becoming a teacher, Deelah worked at the Youth Opportunity Center. And she was stricken by how many of the kids faced challenges similar to the ones she encountered as a child. So when her teaching career took off, she decided to continue to work at the YOC on a part- time basis.

“I’ve been through what a lot these kids are going through,” she said. “And I might be a little more understanding than someone who hasn’t been there.”

Still, her job isn’t easy. Some of the kids face seemingly insurmountable circumstances. “Some of them are put in positions to make choices that adults should be making,” she said.

According to Deelah, that’s the main difference between the kids she cares for at the YOC and the kids she teaches at Grissom: The presence of a caring adult in their lives. “These kids need an adult to give them support, empathy and guidance,” she said.

Deelah has been that person for a number of children at the YOC, and the kids remember her for it. She often hears from former YOC residents who have moved on toward a better life. “I have had kids call and tell me, ‘If it wasn’t for you,Ii wouldn’t be where I am today.’ “

“That’s why the YOC is a part of my heart,” Deelah continued. “And that’s why it’s so important to our community. We have helped a lot of kids, and we’re needed more now than ever.”