On November 5th, Old National Bank’s Champions for a Safe Community presented “100 Men Who Cook” at the Horizon Convention Center, Muncie, Indiana.  On the chef roster this year was the Youth Opportunity Center’s very own Jeff Helm, director of information technology and facilities administration.  Helm served his specialty recipe, Twice Baked Potato Casserole, to over 1100 attendees while YOC employees, friends and members of Helm’s family cheered him on. 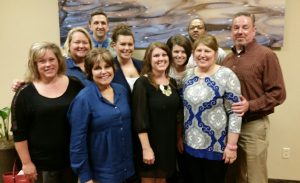 Preparations began a month ago in the YOC kitchen. Several test runs later, Helm had perfected the recipe to serve the large crowd. On the big day, 80 pounds of potatoes and copious quantities of cheese, milk, butter and crumbled bacon were mashed and poured into numerous baking pans then delivered piping-hot to the Horizon Center.  You can find the recipe at

This year’s 100 Men Who Cook raised nearly $115,000 for the Champions for a Safe Community Fund. The Fund, established seven years ago as an ONB community outreach effort, provides programming, services, and activities that support the prevention of violence as well as the protection and care of victims.

The YOC is proud of Chef Helm and delighted to support Champions for a Safe Community and its mission to assist community organizations that serve kids and families.